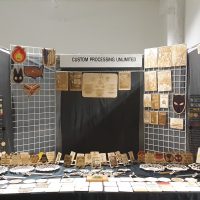 In the midst of this pandemic, things have been a little crazy for pretty much everyone. With that said, that includes me here at CPUnltd. The loss of conventions for over a month’s time (possibly as long as three months) was an unexpected slap in the face to the progress I had laid out for the 2020 year. Truth be told, it was more of a gut check… which lead to a bit of disorientation and loss of breath. But after a little time to generally recoup, I’m getting back on my feet and working to get things rolling in general, let alone the necessary fashion that is going to be required to survive this pandemic and hit the ground running once things are set in their new normal. With all that said, I’d like to start out here by introducing the new, modular booth layout I came up with to be utilized in some fashion or another moving forward. The build time is (currently) about on par with the old setup, but as I get used to doing it, the time will go down. Once I finish a few other modifications revolving specifically around transport, things will be in a MUCH happier place and everything will go much smoother moving forward (pun intended).

This evening, I would like to share some pictures I took not too long ago (shortly after my last convention pre-pandemic). I did this setup at my shop because I wanted to see just how everything looked once fully built vs the image I had in my head of what I wanted. I got to test drive the new booth at that particular convention (Geneva Steam Convention) on it’s last year in it’s current form (current coordinators are moving into other things in their own lives, but I’m hoping someone will pick up the mantle in time to make it happen next year, or at least by 2022). I will share pictures of that setup soon enough. I wanted to do a full setup separate from that because I wanted (needed) to see how everything would lay out once done for my usual convention (ANIME) vs my somewhat limited selection put out for Geneva Steam (STEAMPUNK). Part of the modularity here is that I plan to have different merchandise out for different events… to better suit the clientelle. But I will likely be carrying all of the stock at any particular convention I go to, depending on how I finish revamping the way my stock is orgnaized and transported.

Below is a series of photos of the new display, complete with all the trimmings (for now). The majority of my inventory has been laid out in a way that I feel best suits the aesthetic. A few items were missing for this photo shoot due to being out of stock and not having a chance to make those items before deciding to do the photo shoot, so there will likely be another run of this with the full stock (as well as new items that I will have created at that time).

The entire display fits in to a 7ft by 7ft (and 7ft tall) space. The design is modularized in such a way that allows it to be reconfigured to be as large as 8ft by 8ft (allowing room to be able to easily exit when build inside a 10ft by 10ft inline vendor booth space) or as small as 5ft by 5ft (for those lovely Artist Alley booth spaces that vary in size from convention to convention).

I intend on doing a few small tweaks to the materials list to this display as more modular parts become available (or I build them myself) to speed up build time and increase general flexibility of the displays capabilities. Looking forward to the continued evolution of my display!